Ghosts in a Feedback Loop

“If everyone protects the infrastructure, then who protects my body?”

The lecture performance investigates the relationship between the physical and the digital. Central elements are objects which are constantly rearranged on a table to accompany the unfolding of a semi-biographical narrative.

From the viewers’ perspective, the arrangements of physical objects set on the table can only be seen in parts. In order to get a complete picture, the viewers depend on a mediated representation: A camera’s birds-eye view overlooking the table is projected live on a screen behind the performer.

On the narrative level, the difficulty of engaging with the digital world independently from one’s own physical body is discussed.

In a detective-style investigation, the physical infrastructure of the internet as a perpetually endangered “critical infrastructure" is increasingly intertwined with the dismantling of the self as well as its conception as a mass of data and as an algorithm. The two change places: The “disembodied” internet is turned into a protected fortress whereas the (human) body dissolves into pure information. 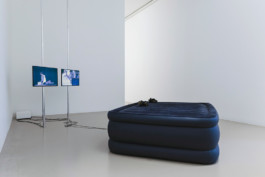